Cassava
Scientific name: Manihot esculenta Crantz
Family: Euphorbiaceae
Popular names: Cassava, cassava, cassava, manioc
Name in English: Cassava
Origin: Brazil
Originally from South America, cassava (Manihot esculenta Crantz) is one of the main energy foods for over 700 million people, mainly in developing countries. More than 100 countries produce cassava, with Brazil participating with 10% of the world production (it is the second largest producer in the world).
Cassava is easily adapted and grown in all Brazilian states, being among the first eight agricultural products in the country, in terms of cultivated area, and the sixth in production value.
It is the third largest source of carbohydrates in the tropics, after rice and corn,[4][5] and one of the main staple foods in the developing world, existing in the basic diet of over half a billion people 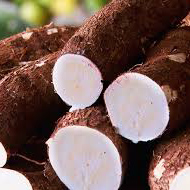