Tectona grandis, popularly known as Teak, is a large tree native to the rainforests situated between 10° and 25°N in the Indian subcontinent and Southeast Asia, mainly in India, Burma, Thailand, Laos, Cambodia, Vietnam and Java. Due to its geographical dispersion and the variety of environments where it occurs naturally, Teak is a species of high adaptability with vertical dispersion between 0 and 1300m above sea level, occurring in areas with annual precipitation of 800 to 2500 mm, and extreme temperatures of 2° to 42°C, but it does not resist frost.

Teak has been cultivated since the 18th century, when the British demanded large quantities of wood for shipbuilding. In South Asia, teak cultivation is traditional and the species is grown on a large scale. Nowadays, the world planted area exceeds 3 million hectares, including, besides the Asians – major producers – other tropical countries such as: Togo, Cameroon, Zaire, Nigeria, Trinidad, Honduras and Brazil, among others.

Although it can only be grown in tropical regions, teak wood is highly sought after (mainly) in the European continent, where the price per cubic meter exceeds that of mahogany itself. Worldwide, teak is appreciated for the quality of its wood, as well as for its rusticity.

Tectona grandis L.f. belongs to the Verbenaceae botanical family. The leaves, which can have opposite disposition to verticilar in groups of three, are coriaceous and measure from 30 to 60cm long by 20 to 35cm wide. The limbs are wide and elliptical, glabrous on the upper side and tomentose on the lower side. The wide leaves make the tree shady from the juvenile stage.

The blossoms are small, yellowish-white and arranged in panicles of up to 40 x 35cm.

The fruit are drupa-like, cylindrical, brown in color and have a diameter of about 1cm. Each fruit has four cavities, inside which are the seeds (one per cavity); however, not all germinate. The first fruiting occurs at 5 or 6 years of age.

When adult the tree reaches 25 to 35m (rarely above 45m) in height and diameter (DAP) of 100cm or more. Its trunk is straight and covered with a thick, fire resistant bark. It loses its leaves during the dry season because it is a deciduous essence.

The sapwood is narrow and clear, very distinct from the heartwood, whose colour is bright brown. This peculiar beauty makes teak a much sought after wood for luxurious interior decoration and fine furniture.

Besides the decorative effect, teak wood is used for the most diverse purposes: shipbuilding, lamination and plywood, firewood and charcoal; the last two are specific to areas of natural occurrence.

The average density of teak is 0.65g/cm³ and, although it is light, it has good resistance to weight, traction and bending, similar to Brazilian mahogany.

The wood is stable; it hardly warps and contracts very little during drying. The stability allows teak (wood) to resist moisture variation in the environment.

Durability is a remarkable characteristic of this species. So far, in the countries where teak is grown, there are few records of pest attacks that could compromise the plantations. The durability of the heartwood is due to tectoquinone, a natural preservative contained in the cells of the wood.

The alburno is a permeable material, property that facilitates the application of condoms. However, this treatment is only necessary when the wood is exposed to time; furthermore, the sapwood has all the other qualities of the heartwood.

Both sapwood and heartwood contain a latex-like substance called caucho, which reduces water absorption and lubricates surfaces. This substance also provides resistance to acids and protects nails and screws from corrosion.

In countries where teak is exploited – from native forest or reforestation – all the wood is used, including logs of small diameter obtained in thinning. Slatted panels are used for the manufacture of furniture, doors, internal decoration and also in the production of the most diverse utensils. The small diameter wood is widely used in the building of rustic constructions, such as beams, support or roof timber.

The Experience of Cáceres, Mato Grosso

Although there are experimental teak plantations in teaching and research institutions (there is a talhão in ESALQ planted in 1959), one of the oldest and most expressive teak reforestations was implanted in Cáceres, in Mato Grosso. In 1968, Cáceres Florestal tested timber species that could boost the reforestation of that region. Among these, Teca proved to be very apt and fast 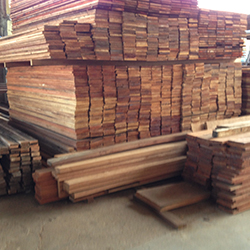